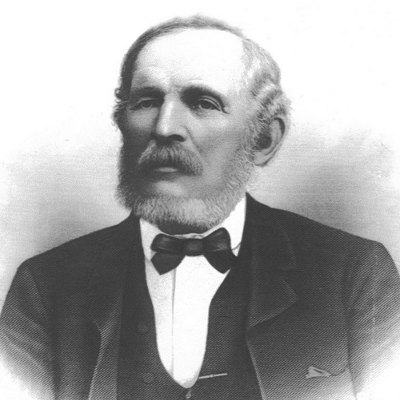 Edward Phillips was born April 2, 1813 in Oxenhall, Gloucestershire, England the son of William and Mary Ann Presdee Phillips.1 At the age of twelve his father died and he was left in the care of his mother. As a teenager, Edward worked on a farm at Credle in Herefordshire and also learned the skills of a blacksmith.

As a young man, Edward was religiously inclined and he associated himself with the United Brethren under the leadership of Father Thomas Kingston. Edward and his mother were members of the United Brethren congregation until missionaries representing the Church of Jesus Christ of Latter-day Saints preached in the vicinity of their hometown. Edward listened to the message of the LDS missionaries and was soon convinced that he should join this new church. He first heard Wilford Woodruff preach at Ridgeway Cross, England in March of 1840. Apostle Woodruff baptized him a few days after their initial meeting.2

Edward’s mother and sister, Susannah, followed him into the LDS Church. Susannah was married to John Hyrum Green and John and Edward were very close friends although John was Edward’s senior by about twelve years.

In 1841, the Phillips’ immigrated to America. Of this trip, Edward later wrote: “I left my home to immigrate to America. I went to Gloucester and in company with 100 saints went to Bristol and boarded the Caroline for America. We set sail for Quebec August 8, 1841. We had a tedious voyage of eight weeks and three days, but landed safely. Thomas Richardson was our president. From Quebec, we went to Montreal by steamer and from Montreal through the lock to Kingston and then we sailed along Lake Ontario to Lewiston. We had a fine view of the city of Toronto. From Lewiston we boarded a train (which was drawn by mules) for Niagara Falls. There we tarried one night and had a fine view of the beautiful falls. The next day, we boarded the train for Buffalo and arrived at that place after dark. We put up at the Farmer’s Exchange for a week. We then boarded the Chesapeake for where now stands the great city of Chicago. We hired a man to take us from there to Nauvoo with a team which contract he filled. We arrived in Nauvoo in the latter part of October, 1841 on Saturday…”3

In Nauvoo, Edward quarried rock for the Nauvoo Temple and in the course of time became acquainted with Miss Hannah Simmons who became his wife on August 2, 1842.4

In Edward’s obituary it is reported that: “Brother Phillips was a member of the Nauvoo Legion, and during the severe trials, which culminated in the martyrdom of the Prophet and the expulsion of the Saints from Illinois, he was active in doing what was in his power to sustain his brethren and sisters; and later, when the departure of the Mormon Battalion took from the exiled Saints their young and able-bodied men, leaving women and children almost destitute, he was one who acted as a protector and supporter of the widows and father to the fatherless.”5

During the exodus from Nauvoo, Illinois in 1846, Edward and his family moved west to Council Point, Iowa Territory where they resided until they could join a wagon train bound for the west.

At the age of thirty-six, Edward along with his family joined the Samuel Gully/Orson Spencer wagon train Company of LDS pioneers. The Gully/Spencer Company departed from Iowa Territory in the spring of 1849 and arrived in the valley of the Great Salt Lake on September 22-24, 18496. The Gully/Spencer Company had approximately one hundred wagons and started its journey from an outfitting post at Kanesville, Iowa Territory (present day Council Bluffs, Iowa). The family settled temporarily in Great Salt Lake City until Edward and his brother-in-law John Hyrum Green explored the region that is now within the boundaries of the cities of Kaysville and Layton, Utah.

Edward Phillips acted as a first counselor to LDS Bishop William Kay from 1851 to 1856. It was at a meeting in his log cabin along Sandy Creek that the first LDS ward in Kaysville was organized. In 1858, Edward participated in the “general move” of the Saints south. He married a second wife Martha Taylor on April 9, 1854 in Salt Lake City. She bore him three children and he was the father of fifteen children by his first wife Hannah. He lived in Kaysville throughout his long life, a prominent citizen, active in civic and church affairs, honored and revered by an entire community.7

Edward Phillips died in Kaysville on December 1, 1896. He was buried in the Kaysville City Cemetery.8 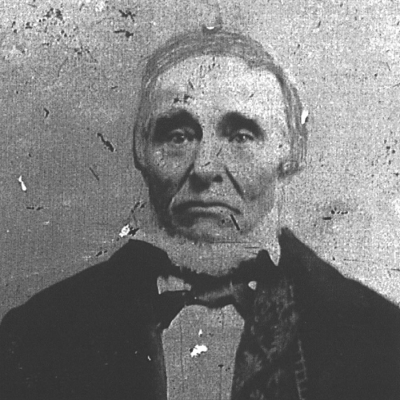 John Hyrum Green was born March 15, 1801 in Worcester, Worchestershire, England the son of William and Mary Steed Green. In 1825, he married Susannah Burrup, who was born November 22, 1816 in England.1 After giving birth to a son, Thomas, Susannah died. John later married Susannah Phillips the daughter of William and Mary Ann Presdee Phillips—a sister of Edward Phillips.2 John and his wife were converted to the LDS Church along with other members of the Phillips and Green families. He was active, along with his brother-in-law Edward Phillips, in the activities of the LDS Church in his native land.

John and his wife Susannah were passengers on the sailing ship Caroline, which also brought Mary Ann Presdee and Edward Phillips to America. He traveled with his family through Canada to Chicago and then to Nauvoo, Illinois. In Nauvoo he passed through the trials and experiences of the Latter-day Saints, as they were distressed following the death of the Prophet Joseph Smith. During the exodus from Nauvoo, John lost his property in a fire and was never compensated.

John and his family traveled across Iowa Territory to Kanesville. There they rested for a brief time before joining a wagon train for the trip west. John and Susannah were members of the George A. Smith/Dan Jones Company.3 This company left Iowa Territory from an outfitting post in Kanesville in the spring of 1849 in company with between three hundred seventy and hour hundred forty-seven Saints traveling in one hundred and twenty wagons. The company arrived in the valley of the Great Salt Lake October 26-30, 1849.4

John and Susannah wintered in Big Cottonwood and then in the spring of 1850 they moved to the site along Sandy Creek that John and his brother-in-law Edward Phillips had explored the previous fall. On January 27, 1851 John was called to be the second counselor to William Kay in Kays Ward.5 He served in this position until 1856.

In 1857, John built a stagecoach station in what is now the City of Layton, Utah.6 This station was located along the main wagon road between Salt Lake City and Ogden, Utah and John furnished prairie hay for the stagecoach teams at $40 per ton. In 1866, he built a fine brick home across the street from the stage station. According to one biographer: “His family furnished refreshments and rest for stagecoach passengers when they stopped overnight. Until just a few years ago, this home was still standing and occupied.”7

John Hyrum Green was the husband of five wives and the father of sixteen children. He was a productive citizen of Kaysville and served his neighbors in many capacities. John died on April 16, 1886 in Kaysville. He was buried a few days later in the Kaysville City Cemetery.8 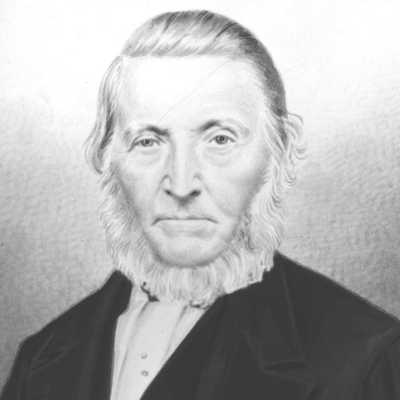 William Kay was born April 11, 1810 in Chaigley, Lancastershire, England the son of William and Elizabeth Kay.1 He spent his early years in Lancastershire and when he was twenty-seven years old he joined the Church of Jesus Christ of Latter-day Saints. Shortly after his LDS baptism, William was ordained an Elder and accepted a call to be a missionary for the LDS Church with a companion named Thomas Richardson. William was a missionary in England off and on for about four years.2 However, in January of 1844, he decided to leave England for America. He traveled to Liverpool, England and boarded a sailing ship called the Fanny of Boston . William was the leader of a group of two hundred and ten LDS converts and the ship sailed for America on January 23, 1844.3

The Fanny sailed to New Orleans, Louisiana where it arrived safely on March 7, 1844. The LDS passengers of the Fanny then traveled up the Mississippi River to Nauvoo, Illinois on the paddle wheeler Maid of Iowa. They reached Nauvoo on April 12, 1844.4

In 1845, at the age of thirty-four William married Mary Wattis Bennett.5 While living in Nauvoo, William and Mary became acquainted with the Phillips and Green families. They had farms near each other and became very close friends. William and Mary lived in Nauvoo until the expulsion of the Latter-day Saints from that place and they traveled by ox drawn wagon to Winter Quarters in Nebraska Territory.

On July 3, 1848, the Kays left Nebraska Territory in the Willard Richards wagon train Company. There were approximately five hundred and twenty-six pioneers in this Company and the wagon train’s journey began from an outfitting post in Winter Quarters, Nebraska Territory. The Kays were in the Franklin D. Richards fifty and William was the captain of the first ten of that group. The Company arrived in the valley of the Great Salt Lake on October 10-19, 1848. After living for a few months in Great Salt Lake City, William and Mary decided to follow Edward Phillips and John Hyrum Green to a spot along Sandy Creek where they could establish a homestead.

On January 27, 1851, William Kay was set apart as the first LDS bishop of what came to be called Kays Ward. Edward Phillips and John Hyrum Green were his counselors.6

Following the creation of an LDS ward, the settlement and stream where the Phillips, Green and Kay families settled came to be called Kays Ward and Kays Creek. Later the settlement’s name was changed to Kaysville, but the name of the stream survives today.

In 1853, William married Mary E. Nelson and he resided in Kays Ward until 1856 when he was called on a mission to help settle the country near Carson City, Nevada Territory. He was a builder of the settlement of Genoa and farmed there for about two years. When the Utah War loomed, the settlers of Nevada Territory were recalled to Great Salt Lake City and William and his family returned to Utah Territory eventually settling first in Ogden, Utah. Later he moved his family to West Weber but returned to Ogden in 1864. He resided in Ogden until his death, which occurred on March 25, 1875.7

His obituary in the Ogden Junction said of him: “He was a man of unflinching integrity and labored unremittingly in the gospel and during his ministerial career he baptized nearly a thousand persons into the church. He was the father of sixteen children (two of the sixteen were step-children), twelve of whom survive him.

“In all of his relations as a husband and a father he was noted for his affection and kindness. He was universally respected by his brethren and lived and died in the full faith of a glorious resurrection with the just.”8

William Kay was buried in the Ogden City Cemetery.9