The mission of the Layton City Fire Department is to provide programs of quality life safety education, fire protection service, hazardous materials incident mitigation and comprehensive emergency medical services for the citizens and guests of the community with 100% customer satisfaction.

On November 28, 1928, a meeting was held to form a fire department in Layton City. There were eight men in attendance. These men became the first members of the department. At that time laws and regulations were created governing the operations of the department. In early 1928, the Layton Town Board authorized the purchase of a new fire engine, the first-ever piece of fire equipment in Layton City. On August 24, 1928, a new 500-gallon-per-minute American LaFrance fire engine was tested by the Board of Fire Underwriters of the Pacific and passed the acceptance test.

In 1928 Layton City Fire Department handled all fires in the North end of Davis County and continued to do so until 1943 when Clearfield City organized a fire department. In 1942, the Federal Government provided Layton City with a new fire truck in exchange for fire protection for the Verdland Park area. This was an area located between Gentile and the Layton swimming pool. In 1953, a renovation was made of the old City Hall located at 37 East Gentile to accommodate the Fire Department.

In 1960, a new 1,000-gallon-per-minute fire pumper was added to the Fire Department, and in 1970 a new 1,250-gallon-per-minute pumper was added. This was one of the first diesel powered fire engines in Utah. A new fire station was built at 199 North Fort Lane in 1972. This station currently remains in operation. When Layton Hills Mall was built in 1979, the decision was made to purchase a combination aerial ladder truck and pumper for fire protection.

All Fire Department personnel were volunteer firefighters until January 1, 1975, when John H. Adams was appointed as the first full-time member of the Layton Fire Department. He was the Fire Chief and remained the Chief until May of 1987 when he retired. In 1980 Cort Galbraith was hired as a full-time fire inspector. He was promoted to Fire Marshal on March 1, 1986, and retired in April, 1997.

July 1, 1981, six full-time firefighters were hired to man the station 24 hours per day seven days a week, two men per shift. A full-time secretary position was created July 10, 1985. On March 10, 1986, Scott Adams was promoted to Assistant Chief in charge of operations of the combat firefighters.

In December 2003, the city appointed Kevin Ward as the new Fire Chief. He will begin serving the city on January 12, 2004.

The population of Layton City grew rapidly in the 1980’s and 1990’s. In March of 1992, construction began on a second fire station built in the east part of Layton City. The building was completed and opened October 1, 1992. The address is 2701 North Church Street. At that time six additional full-time firefighters were hired to man the fire station with two men per shift, 24 hours per day. The paid-on-call firefighter staff was expanded in 1992 to 27 firefighters. These firefighters respond back to the stations or to fire scenes for manning. All members of the department are certified EMTs. They also have certification as Firefighter I, Hazardous Materials Awareness, and Operations.

Building expansion throughout Layton City also increased in the 1980’s and 1990’s. In February of 1992, a part-time fire inspector was hired to assist the Fire Marshal. The Fire Prevention office enforces the City Fire Code and all State Fire Codes. Fire investigation and fire prevention programs are part of their duties. Dean Hunt was hired as the new full-time Fire Marshal in April, 1997. The part-time inspector position became full-time in July, 1999.

In October of 1993 Layton city received approval from the Utah State Bureau of Emergency Medical Services to license an ambulance service for Layton City. Two licensed ambulances with automatic defibrillators were purchased and placed in service May 3, 1994, one in each fire station. During the first year of operation the ambulance service responded to over 1,300 calls for service. The ambulance fund is a fee for service account. Monies are collected for supplies and transportation costs. The Fire Department also bills for Davis County Sheriff’s paramedic fees. These fees are then sent to the Davis County sheriff’s Office.

In May of 1994, an office was developed in the Fire Department for ambulance billing and follow-up of all ambulance accounts. This information is provided to the City Finance Department where collection of all funds is done. All monies collected for the service remain in an enterprise fund providing funding to operate the service. A part-time secretary was hired in 1994 to assist the full-time secretary in secretarial duties and ambulance billing needs. This part-time position became full-time in July, 1998.

In the fall of 1997, construction was started on a third fire station located at 530 North 2200 West to serve the West side of Layton City. This station became the new headquarters station with approximately 12,000 square feet of finished space. Nine full-time firefighters were added to the roster at this time along with six paid-on-call firefighters in order to allow for manning of all three stations 24 hours a day.

In the year 2000, application was made with the Utah State Bureau of Emergency Medical Services for Layton City Fire Department to operate one paramedic unit in joint licensure with the Davis County Sheriff’s Office. On April 2, 2001, this paramedic unit went into service to provide ALS services for the citizens of Layton City.

The Layton City Fire Department currently provides fire protection and medical coverage for 25 square miles of property, which includes unincorporated areas of the County. The City has a fire agreement with Davis County to protect unincorporated areas. The City also has an agreement with the Davis County Solid Waste Management and Energy Recovery Facility and Landfill to provide inspection and firefighting needs. The Department has 11 mutual aid agreements with surrounding fire departments in Davis County including Hill Air Force Base to assist in the time of major emergency. 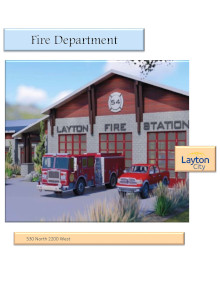