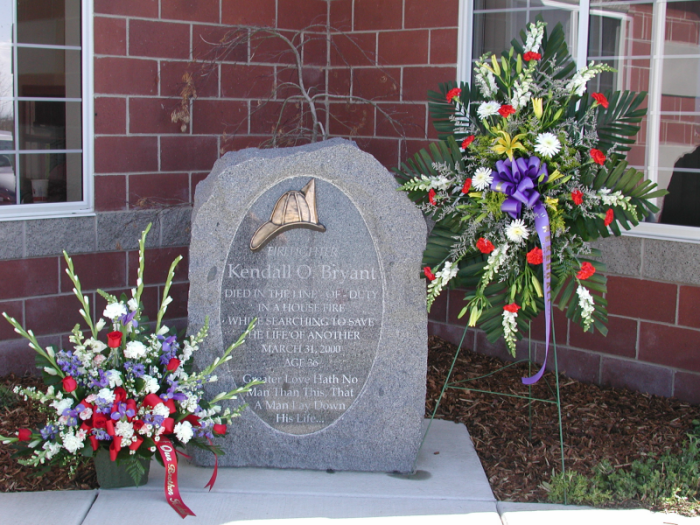 As the two water canons sprayed a fine mist into a towering arch, three firefighters in full turn-out gear walked slowly towards the water as a loan bagpiper followed them playing Amazing Grace. As they approached the water, two of the firefighters knelt dropping their heads as the third firefighter walked slowly into the mist symbolic of the final journey of Firefighter Kendall O. Bryant who passed from this life in the line of duty on March 31, 2000, while doing what he loved best, fighting a structure fire in Layton City.

Firefighters and other public safety officials from throughout the state came together to participate in a memorial tribute to Kendall. Chief Peek from Layton City Fire Department along with Chief Mike Mathieu conducted the memorial services held at Layton City Fire Station #1. Chief Peek stated: "Throughout most of history, the life of a firefighter has been closely associated with the ringing of the bell. As he begins his hours of duty, it is the bell that started it off. Throughout the day and night, each alarm was sounded by a bell which called him to lend aid to those in need to fight a fire and to place his life in jeopardy to the good of his fellow man. When the fire was out and the alarm had come to an end, the bell rang three times to signal the end."

Prior to the memorial service on April 4th, a viewing was conducted at Ogden Fire Station #1. Fire engines from all over the state were in the procession, which traveled from the Ogden Fire Station #1 to an LDS stake center in Clearfield where funeral services were conducted. The procession then wound its way to Layton's Fire Station #1. On West Hillfield Road in Layton. 13 aerial trucks raised their ladders in tribute to Kendall forming an arch over the street from which two large American flags flew over the procession as it traveled to the station. The following day funeral services were again conducted in Cedar City, and Kendall again heard the final alarm at the Cedar City cemetery where he was laid to rest.

Kendall O. Bryant was born in Abilene Texas, on February 12, 1964, to Garth and Dianne Bryant whom he leaves behind. He also leaves behind his wife, Michelle, and their three children, Tyrell, Charnae, and Devin. Kendall was a hard worker who loved all sports, especially wrestling and baseball. He was always ready for a challenge and loved to bet on anything.

Kendall was proud to be a firefighter. He was a much loved and respected firefighter at both Layton City Fire Department where he worked part-time and Ogeden City Fire Department where he worked full-time. During the services Kendall's brother, Coy, spoke about his brother. "No one wanted to be a fireman more than Kendall. Kendall died doing what he always wanted to do and deep down he wanted to prove he was a hero. Well, Kendall, you're my hero."

It takes a special person to be a firefighter. Firefighters have to have a soft heart and a hard head. They have to be willing to help the tiniest person or animal that lives and battle one of the most frightening and dangerous things on the face of the earth. And when they battle that fire, they are not afraid. They live to face the fire and conquer it and those of us who cannot face that battle are grateful to those who have the strength and the courage to bring us out of the fire, save the things and people we love, climb in the holes where we fall, climb the mountains when we can't get ourselves down, clean up after we've made a mess, bandage out wounds, pullus from our wrecked cars, and literally save us from ourselves.

These men and women who each day choose to follow the "most dangerous profession in the world" deserve our honor, respect, admiration, and love. It was with great love that Firefighter Kendall O. Bryant was laid to rest in a cemetery in Cedar City, Utah. Those of us who knew him will always miss him and see him in every fire we fight. Those of us who were his brother firefighters will know he fought the best fight and won.